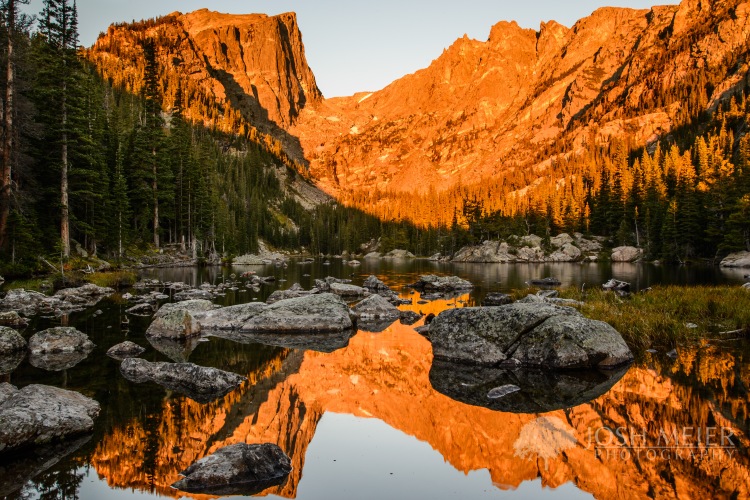 The following was taken from a daily handwritten journal I kept while on a recent photography trip from Iowa to California and back. It is meant to provide insight and dismiss suspicions that this is a carefree occupation of no work and all play. (Click here for the introductory post.) I’ll be the first to admit that I am still learning, and the last to claim I have it all figured out. This is simply the story of my experiences, a day by day account of what it’s like to be a nature photographer out on the road…

Despite being pretty exhausted after a full day of hiking and photography, I didn’t sleep well last night. I’d decided to take one more shot at Dream Lake and while it hadn’t been overly crowded on my first attempt, if another photographer or two had arrived before me it would have been pretty tight trying to squeeze into position. I couldn’t control the potential for a crowd, but I could make sure that this time I was there early enough to guarantee a spot. Unfortunately, drifting off to sleep while engaged in a self-debate as to just how early that should be left me tossing, turning and waking every twenty minutes with the fear I had overslept. At 4:30 I roused myself for good and was to the trailhead and hiking by five.

Back up that same dark path for the third time in as many days I moved easier than before. I carried about half the weight I hauled with me yesterday and the elevation no longer seemed a factor. I had myself in position by five thirty, the first one at the lakeshore, and it was a good half hour before any other photographers began to filter in.

In contrast to yesterday’s experience, this morning was clear and calm. It was nice for stargazing during the hour and a half I had to wait until daybreak, but sunrise itself wasn’t quite what I had hoped. The water on the lake was very still and allowed for great reflections of brilliant red alpenglow cast on the mountains, but in the absence of clouds the sky itself was lifeless and dull. Yes, we should be grateful for every sunrise that we are fortunate enough to witness, and I did enjoy this one. From a nature photographers perspective though it wasn’t exactly ideal and serves yet another example of how difficult it is to just show up on location and capture an amazing shot. So many variables need to perfectly align and great photos are usually the result of some combination of perseverance, determination, skill; and a dash of good luck.

The photographer I met yesterday from New York also came back to Dream Lake this morning, and I visited with him for a few minutes as we packed up our gear after the shoot. I’d overheard him say that he had been in Colorado for a couple of weeks and had been to a site called the Maroon Bells. The Bells are a pair of picturesque mountain peaks near Aspen; said to be the most photographed scene in the state. Even if you haven’t heard of it by name, (as I hadn’t until just a couple of months ago,) chances are you’ve seen an image captured there. It’s the quintessential Colorado setting with stunning mountains stretched high above a serene alpine lake.

I’ve been back and forth for several weeks now whether I want to visit the Maroon Bells or not. I have mixed feelings toward sites like this, and images known as “trophy shots.” Trophy shots are those captured of popular scenes, usually at an easily accessible location. They are particularly prevalent in the western United States, and many photographers focus almost exclusively on traveling to and photographing these places. They don’t take a lot of thought or creativity. In fact, continuing with the trophy seeker comparison, a photographer with the sole intent of collecting such images is the equivalent of a big game hunter who hires some cushy guide service to lead them into the field with a near guarantee of bagging a fourteen point buck. The hunt loses much of its integrity, but the trophy sure looks nice hanging on the wall.

This isn’t to say I haven’t shot at these types of locations. The Watchman in Zion, Delicate Arch, and Yosemite’s Valley View are all what could be considered trophy sites, and I’ve tried my luck at each in the past. The thing is I’m in the business of trying to capture beautiful images (and I’m also passionate about and love to visit national parks where many “trophy” views are found.) In the case of these three examples chances are I would have stumbled upon and photographed them myself simply by visiting their respective parks, even without knowing thousands of photographers had done so before.

I’ve also intentionally avoided sites that I know to be popular, simply out of spite. Such decisions have generally been made shortly after a bad experience that has left me resentful toward the tunnel-visioned masses that jockey for elbow room and a near identical version of a photo they’ve seen online. In these cases I almost invariably end up kicking myself later; once I’ve stepped away from the moment enough to realize that stubbornness has led to my own injustice. I mean what’s worse- taking a common photo, or refusing to capture a good photo? The topic has evoked more than its share of internal strife as I learn more about photography and develop my own personal ethos. What I think I’ve finally settled on is this: I will no longer pass up opportunities for a great photo regardless of how popular a scene is. By the same token, however, I refuse to become one of those who obsess over trophy locations or who builds a portfolio solely consisting of trophy shots.

So what’s the dilemma? Why the indecision over Maroon Bells? To be honest, it’s all about the crowds. I’ve now researched the site enough to know that upwards of 300 photographers will line the lakeshore for sunrise, and that autumn is an especially popular time. This year it sounds like the aspens are putting on quite a show down there, and they should be near peak color right now. I don’t know the area enough to say for sure, but it sounds like the recipe for a mob scene. People can get sort of chippy under such circumstances, and that’s just not an enjoyable environment to shoot in. I’m really compelled to go down there for the color because my timing is near perfect and who knows if I’ll be able to align a visit this well again. But I don’t want to go if the crowds will take the pleasure out of it.

That’s where Mike came in, the photographer from New York. I mentioned that I’d heard him say he’d been to Maroon Bells and asked for his thoughts. He said again that he’d been there last week, and while he’d been told the colors then weren’t yet at peak, he thought they were pretty nice. As for the people, yes there were a lot there but for the most part it was a friendly atmosphere. It didn’t sound like he’d have any reservations about going back again. Mike also advised that I go to shoot sunrise, but also wait for a couple hours after when the sun would be high enough to illuminate the slopes and renew the reflection of the mountains on the lake.

Hearing this firsthand account was really helpful. It makes the prospect of shoreline hordes a little less intimidating and alters my potential strategy to include the mid-morning sun. I haven’t yet decided for sure if I’ll go down to Aspen but the conversation definitely added another check in the pros column and will have a big impact on how I spend the next couple of days.

Note- Before parting ways at Dream Lake, Mike handed me one of his business cards so I could take a look at his work when I got back home. I did so a couple weeks after this was written, and have been fascinated by his photography since. Seriously, I met several photographers while I was out on the road (some really, really talented folks) but his is some of the best I have seen. I follow many photographers of varying ability and professional levels on social media and in private contemplation often compare how my work stacks up against theirs. A lot of times I can find parallels, but this is one of those cases where it’s not even close.  I view his photos for inspirational examples of where I want my skill level to eventually be.

If you love great nature photography, especially that from the New England region click here to check out his Michael Danielson Photography website or view his images on any of the platforms at the links below. And be sure to give him a follow!